Steve ran the Great South Run on October 23rd in the autumn sunshine. The 10 mile run took him through the sights of Southsea and Portsmouth past HMS Victory, Spinnaker Tower and views of the Isle of Wight. This was certainly a victory for you Steve, finishing in a time of 01:26:37. Jules was there to support him, but still resting from running due to a back injury. Get well soon Jules and congratulations Steve.

To support Jules and Steve leave a message on their Just Giving page visit http://www.justgiving.com/JulesnSteve
or text MRSA66 to 70070 and the amount to donate

Jules and Steve kicked off MRSA Awareness Month October in Chester, along with Ted their cute little terrier. Jules was there to cheer Steve on in the Chester Marathon. The grueling run started at Chester Racecourse (Ted thinks he would be good at this too!).

Jules commented "He did it! I'm so proud of him the last 10k was a struggle but he was determined to finish with a smile on his face and is very very happy with 04:29:00"

A huge thank you Steve and congratulations on completing the Chester Marathon.

Steve competed in the Rotary Challenge Race the Train going solo this year, he finished in 02:30:03 (the train in 01:45:00). Jules was there to support him and to enjoy North Wales. Last year’s race was sunny and hot, not this year though, hope it wasn’t too wet, windy and muddy Steve. Looking good in your MRSA Action UK top there. Hope you got to celebrate your wedding anniversary after. Congratulations to you both!

On Sunday 17 July Jules and Steve returned to the stadium to take part in the Great Newham London Run, they completed the race in 00:57:44 on a very hot day too!

Jules and Steve took part in an impromptu race on Saturday 4 June. The venue for the Queen Elizabeth Olympic Park, and they were reward with medals and cake!

The 10k and 5k races take place throughout the summer on the first Saturday of the month. Lovely venue Jules and Steve, and love the posing on the podium!

Jules and Steve completed the race in 54 minutes.

This was quite an achievement for them both as they have taken a break from running for a while. Well done thank you both for taking part for MRSA Action UK.

Jules and Steve took part in the 32nd annual Great Baddow 10 miler with hundreds of runners of all abilities. The event is organised by the Rotary Club of Chelmsford Mildmay, with entry fees going to local charitable causes.

People take prams, their dogs and push their children around a two-mile fun run, making it a great day out for everyone. Local scouts, schools and sea cadets get a share of the cash as a thank you for marshalling the car parks and lending minibuses and marquees. Runners who wish to raise funds as well as paying their entry fee can choose to support any charity they wish.

Thank you Jules and Steve for running for MRSA Action UK. This race brings your total miles to over 1,000 (each) without the training!

Jules and Steve completed their first race of the year in the Colchester Half Marathon. They had a break of 3 months, but undaunted they both finished in 2 hours. The race broke records with thousands of runners taking part in the spring sunshine.

You smashed it again Jules and Steve! Thanks again for all you do for MRSA Action UK.

Jules and Steve completed their Christmas run at the venue where Mo Farah made British history by winning Olympic Gold in both the 5k and the 10k at the 2012 London Olympic Games. Jules finished in 00:53:23 and Steve in 00:53:24.

Looking festive with your friends Jules and Steve and love the medal!

On November 7 Jules completed the Poppy Half Marathon.It was a wild and wet event. Melanie Harrison Pavlou came all the way from Capetown South Africa to join Jules in her first half marathon on British soil. Jules says “She may never be the same again. “Running with friends..... the finishing time doesn’t matter”. They did great ‬‬ Jules finished in 2:07:49.15 and Melanie in 2:07:49.95.

This was a great way to remember our heroes, and particularly poignant for Jules and Steve, as November 7th is the anniversary of Don’s birthday - Steve’s dad who passed away with MRSA in 2007 - which is why they do so much to raise awareness. We know Don would be so proud of you both.

A nice day for a trip to Portsmouth, beautiful for October, hope you weren't too hot running both of you! Although Jules says it was a fab day as ever. Thank you Jules and Steve, as well as all the training and running you do there is a lot of travelling, and you give up so much of your time, you have so much energy and we really appreciate everything you do for MRSA Action UK.

On October 18 Jules and Steve ran the Chelmsford Marathon, they were supported on the day by their friends, family and colleagues. Steve struggled with a groin strain at mile 16, but continued regardless, they finished together in 4:46:43. It is good to know that so many people care and support Jules and Steve and MRSA Action UK. If you use facebook, twitter or other social media you can help to promote them too. It’s a great way to keep up-to-date with their running and help to promote their Just Giving fund raising page. They are phenomenal - 82 races and 3,000 kilometres between them to date!

On 27 September Jules completed the Finsbury Park 10k, London in 1:13:07. Jules is pictured with her friends who completed their very first 10k.

Jules loves her rugby and volunteered at the 2015 Rugby World Cup events. Here she is at the end of a Sunday shift earlier this month.

Glad you got the chance to be involved Jules, you deserve it!

Jules and Steve competed with the Rotary Challenge train time of 1h 47m 46s. They had a gruelling challenge which they say they enjoyed and finished in 2h 24m 46s. Their photo shows them plunging through the cold water whilst a colleague is more cautious sticking to the stepping stones rather than getting cold feet! Brrrr.... that part looked chilly, but may have been a welcome relief from the warm sunshine. Great stuff Jules and Steve!

Jules and Steve were back at the Olympic Stadium for the Newham 10k race. They crossed the track finish line where world-class athletes made their appearance at the London 2012 Olympic and Paralympic Games. Steve finished 00:50:22 and Jules in 00:53:36. It was a lovely day as you can see from their photo, but of course that made it a hot one.

Three years ago Jules was proud to be helping out at the London 2012 Olympics in her Gamesmaker role, as was our Vice Chair Helen Bronstein, what a great way to remember Jules.

Well done Jules and Steve and thank you for running for MRSA Action UK.

Jules and Steve completed the Lee Valley 10k and both finished in 00:52:29, a completely off road run. Jules tells us the route was lovely. They had cloud cover so it wasn't too hot. Thank you Jules and Steve, another great run for you both.

The race took place within the grounds of Trent Country Park, a beautiful location giving runners the opportunity to take in grass and path, woods and open fields, a few hills and some fast roadway. Jules and Steve enjoyed their run with no injuries, Jules in 00:56:25 and Steve in 00:53:26, and they are both looking happy in their photo. Thank you Jules and Steve.

Our thanks go to the ladies at Winifred Dell Care Home for making teddies to raise funds for MRSA Action UK. Jules Owen is offering these cute teddies for a suggested donation of £2 to friends and colleagues. Each teddy has a hand wash spray, so the message about hand hygiene in helping to protect us from infections is clear - it's always good to have clean hands to stave off things like tummy bugs and flu, not just for the care setting! These cute bears are irresistible. Thanks ladies, and thanks Jules yet again!

Steve was on his own for this one. Jules was injured and was unable to take part, she had a run of bad luck, but some good fortune too, after losing a stone from her ring someone found it and it was returned to her, thank goodness. Steve didn't break any records this time finishing in 2:00:41 (Jules says he hobbled home!), but he is still smiling as always. Thanks for all you both do for us Jules and Steve.

It was a hot and exhausting race for Jules and Steve. The Bedgbury Park Half Marathon Trailblazer through Bedgbury Forest didn't get the better of them though. Jules completed in 02:01:42 and Steve pipped Jules to the post this time in 01:55:51. A fantastic run despite the heat. Thank you Jules and Steve.

Another week and yet another fantastic race for Jules and Steve Owen. Jules achieved a personal best of 50:02. She said "Great race. So close but no cigar..... 50.02! A PB but so wish I could've knocked those seconds off.."

Always striving for perfection Jules. We think Team Owen is just perfect as it is.

Another great achievement for Jules and Steve! Jules completed the 10 miles in 84:00 minutes, and Steve excelled with yet another personal best of 81:02. They just keep going from strength to strength.

To support them leave a message on their Just Giving page visit http://www.justgiving.com/JulesnSteve
or text MRSA66 to 70070 and the amount to donate

Just two weeks after the London Marathon, Jules and Steve do it again. Tired legs made it hard going but they both completed the race for MRSA Action UK in style.

Jules and Steve have raised &pound5,288.96 and have now clocked up over 1,660 race miles between them (without the training). They are truly amazing!

Jules and Steve are happy after the race. Steve's vest denotes the pain and the glory!

Just two weeks before the London Marathon and Jules and Steve are triumphant in Brighton with another hot 26 miles under their belts. It was hot and a tough run, but they both rose to the challenge and crossed the finish line together in 04:26:51. We think they look fantastic, a winning team! 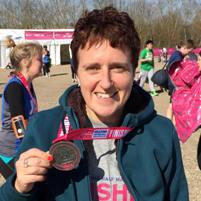 Jules completes the Colchester Half

"Colchester half done in 1.51. Good considering the weather, the wind was a killer for the last three miles, support great as ever. The wind and hills did not defeat me today and I stayed upright" 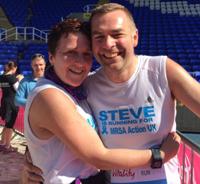 Jules and Steve complete the Reading Half

Jules was so pleased with her time, a personal best of 1:48:25, this was a fantastic achievement as Jules took a tumble and ran on undaunted with grazed arms and legs, all for MRSA Action UK! 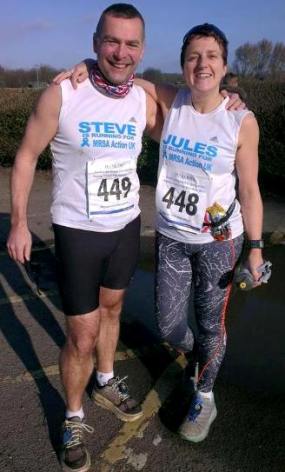 Jules and Steve complete the Roding Valley Half Marathon

Jules and Steve completed the Roding Valley Half Marathon on Sunday 8th March. Over 600 runners took part in the spring-like conditions.

Jules said she looked happier than she felt.

We think you both look fabulous, as always.

Jules and Steve Owen have been running since the beginning of 2011 in memory of Donald Owen, Steve's dad, who sadly passed away after contracting MRSA following a knee operation. Their phenomenal efforts are recognised everywhere they go raising awareness of MRSA and we are privileged to have them doing this to raise funds for MRSA Action UK.