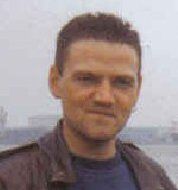 My son Colin, youngest of my six children, went into the Queen Elizabeth Hospital in Birmingham in 2003 for a liver transplant assessment. This procedure should have taken about five days.

One week led to another without us being told why, during this time he was up and about with occasional swelling to his ankles and legs. Colin was his usual cheerful self - he loved to laugh and joke and help other patients who were bedridden. He was very popular with the staff whenever he went into hospital. Colin told us that he had passed his tests for a new liver and we were all so happy. But we didn't know why he was being kept in, we were not being informed about anything! We travelled every other day to visit Colin and noticed that he was becoming more ill each time - his legs were weeping fluid. He eventually became bedridden himself and needed to remain on oxygen, wired up to monitors, drips and a catheter with three lines going into his groin, a line going into his neck and at one point a feeder going into his nose, his lips were cracked and dry and he had bed sores.

Colin told us on the 23rd June that one night he rang his buzzer and a foreign nurse came she didn't seem to understand what a bedpan was and after running out of descriptive words of what he needed and, bearing in mind he was wearing an oxygen mask, the nurse came back with a cup !! In his desperation he pulled his mask off and shouted for someone - anyone - to bring him a bedpan which they did.

Colin said he could only hear giggling and laughing coming from the nurse's room and some nights it kept him awake, another patient agreed - he was an ex-Army intelligence officer who also died not long after Colin. Under his bed was never cleaned and Colin's oxygen mask was often hanging down onto the dirty floor - his brother asked for a new one on one occasion. He began to look neglected and we asked if his brothers could bath him and wash his hair and shave him - which they did - his sister Linda cut Colin's toe nails and massaged his poor feet with aqueous cream - it did seem to make him more comfortable. We always kept small bottles of water and Lucozade by his bed, but he couldn't reach them. He couldn't pour water from the heavy jug into the small plastic cup - he was so thirsty (it was a hot summer) but he didn't want to be any trouble! His packets of build-up were piling up - we found eight on one visit which had not been mixed and given to him - vital nourishment which was denied him! When the bedside table was removed (pushed away for treatment etc) Colin was unable to reach for anything and again he didn't bother staff for something he didn't consider was a medical request.

As Colin was becoming more ill we had requested to speak with a Doctor for the next visit - as four weeks had now passed. We wanted to ask what was happening and what plans they had for Colin's future. When we arrived that day - 23 June 2003 - the Doctor and a nurse were present, I asked if we should talk in the day room (he was in a 16 bed ward - no isolation) he said that Colin knew what he was going to say. Colin was sat up and I hugged him and sat by his bed holding his hand. The curtain was drawn and Colin's two brothers, one sister and two friends stood at the foot of the bed. The Doctor sat at the other side of Colin's bed and held his hand (I thought it odd at the time) - he said that Colin had asked that morning for the good news or the bad news and that Colin had expressed the view that he was dying - asking the Doctor to tell us too.

I will never forget our shock and the pain of seeing Colin's face ... looking at each of us he was sat up in his bed as we tried to hold back our tears whilst the Doctor told us that Colin was dying - that all of his organs were failing and he also had Pneumonia (no mention of MRSA) I asked a nurse if we could be tested to give Colin a kidney, she said that it didn't work like that. I told the Doctor we didn't know there was anything wrong with his kidneys until that moment! He then told us that CPR wouldn't be given if his heart stopped. And because his liver had packed up the medication Vancomycin, could only eventually go back up around his brain and that would be permanent. Colin was incredibly brave - thinking only of us - it was later Colin told us about the bed pan incident. He was so bedsore and said sometimes when he requested one, they would just drop it on the bed - it was impossible for him to sit on without help, other times they would be too busy or forget to help him off. I find this so heartbreaking and hard to bear - he would never wish to be a nuisance to anyone!

We asked if Colin could be transferred to our local hospital Leighton or anywhere nearer home so that he would have visitors all of the time, but they said that theirs was the only hospital in the country that could help him now and to move him would kill him. Not knowing how long Colin had left - we thought it would be months - we feel heartbroken that we could not afford to visit him every day or stay over night - obviously if we had known it would be just less than two weeks circumstances would have been different. To come away and leave him there dying so far from home on his own was indescribably painful and this again was down to him having MRSA. Colin suffered so much in that dirty hospital and he was so brave. Seven weeks after being admitted Colin died - he was 32 years old and it was the day before his birthday. Sepsis was stated as the cause of his death! I was in shock for a whole year and felt totally useless! I had obtained Colin's records and gave them to a solicitor - expecting JUSTICE - How wrong I was!

At the end of 2003 during our meeting with the professor (Oct 3rd) when we were assured improvements would be made to the unit. I discussed all complaints with the Ward Manager. This was 14 weeks after Colin died that we were told that Colin had MRSA!!

I feel I must bring Justice for him and with Your help and God's help we must at least try. If we can stop just one more person suffering, and when Government and hospitals begin to admit that they have failed our loved ones then this will all be worthwhile. Families must be told - patient confidentiality doesn't come into it! What better reason could there be for victims of MRSA to join together and take Action to make a difference. There is so much more that I could say and one day perhaps I will have the chance to tell all of Colin's story.